Deprecated: Return type of HM\BackUpWordPress\CleanUpIterator::accept() should either be compatible with FilterIterator::accept(): bool, or the #[\ReturnTypeWillChange] attribute should be used to temporarily suppress the notice in /home/planne22/plannerperfectmeals.com/wp-content/plugins/backupwordpress/classes/class-path.php on line 456
 apple dumplings 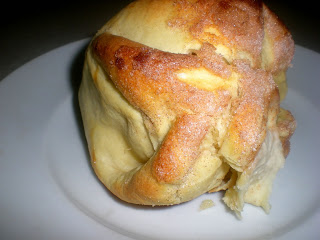 Apple Dumplings
My crew is in love with my apple pie, so this was the next best thing. Your own personal apple pie! A juicy, soft apple encased in a pie crust and sweetened with the perfect amount of cinnamon and sugar…you’re going to want to try this soon!
printable recipe
Ingredients:
Dough:
21/2cups unbleached flour
3 tbsp. sugar
2 tsp. baking powder
3/4 tsp. salt
15 tbsp. butter, cut into 1/2 inch pieces and chilled
1/4 cup cold buttermik
Apples:
6 tbsp. sugar
1 tsp. ground cinnamon
3 tbsp. butter, softened
4 Golden Delicious apples
2 egg whites, lightly beaten
For the dough:
Process the flour, sugar, baking powder, and salt in a food processor until combined. Scatter the butter and shortening over the flour mixture and pulse until the mixture resembles wet sand. Transfer the mixture to a bowl. Stir in the buttermilk until a dough forms. Place the dough on a lightly floured counter and knead briefly until the dough is cohesive. Press the dough into an 8 by 4- inch rectangle. Cut in half crosswise, wrap each half tightly in plastic wrap, and refrigerate until firm, about 1 hour.

For the apples:
Adjust an oven rack to the middle position and heat the oven 425 degrees. Combine the sugar and cinnamon in a small bowl. In a second bowl, combine the butter, and 3 tbsp of the cinnamon sugar mixture. Peel the apples and halve them through the equator. Remove the core using a melon baller and pack the butter mixture in to each apple half.
On a lightly floured counter, roll each dough half into a 12-inch square. Cut each 12-inch square into four 6-inch squares. Working 1 at a time, lightly brush the edges of each dough square with the egg white and place an apple half, cut side up, in teh center of each square. Gather the dough 1 courner at at time on top of the apple, crimping the edges to seal. Cut a vent hole in teh top of each dumpling.
Line a rimmed baking sheet with parchment paper. Arrange the dumplings on the sheet, brush the tops with egg white, and sprinkle with the remaining cinnamon sugar. Bake until the dough is golden brown and juices are bubbling, 20-25 minutes. Cool the dumplings on the baking sheet for 10 minutes.
Serve with vanilla ice cream!